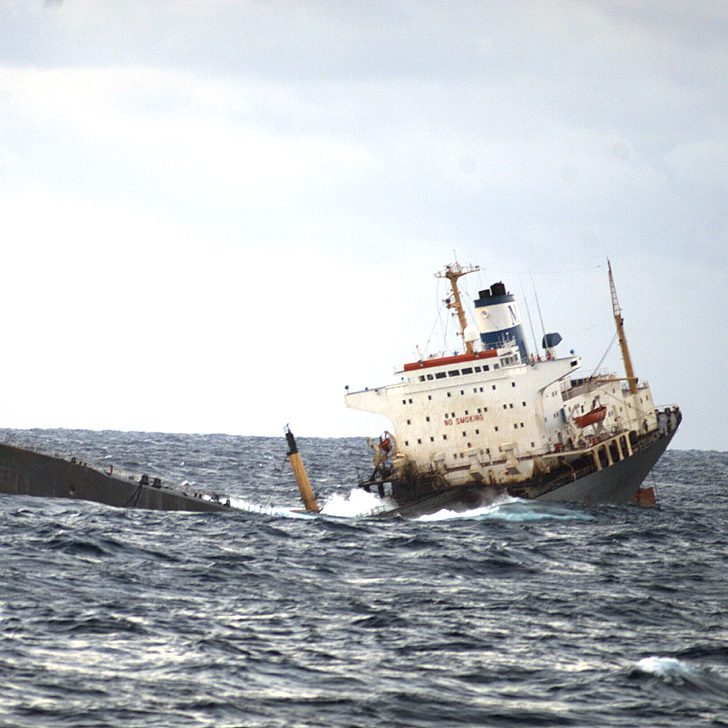 The judgment rendered by the Spanish Supreme Court on the 14th January 2016 revokes the former judgement by the Court of Appeal and convicts the Captain for a criminal offence against the environment. The Spanish top court finds that the Captain acted recklessly both before and after the casualty, based on the following proven facts:

– The Captain was aware of some operative deficiencies before the voyage (the autopilot was not operative; failure of several heating coils used to heat the fuel).

– The tanker was overloaded, with an overdraft of 0.30 meters (meaning 2.150 tons of excess cargo) above her loading lines.

– The Captain loaded ballast water to right the vessel. This ballast increased the draught (which impeded access to a port of refuge) and affected the fatigue of the hull. Had the heating coils worked properly the cargo could have been transferred to correct the listing.

– The Captain took two hours and thirty minutes to accept to take tugs, alleging he was waiting for Owners instructions.

– All the crew, except the three officers, were evacuated following the Captain’s request, in spite of the fact that the aft towing system was obsolete and needed four persons to operate it.

In our view the response in these catastrophes should be to ensure that the tankers navigate in adequate conditions, and therefore, to increase the controls and the liability of Class Societies, cargo owners and those ones responsible of the vessel’s technical maintenance. Blaming the Captains is a mistake and only defocuses the true point of attention.

The Supreme Court analysis on economic liability deserves thorough attention. The Captain and the Owner are found fully liable without possibility to limit liability. Allegedly the Captain should have foreseen the possibility of a severe casualty happening and such predictability is enough to lose the benefit of limitation set out in the CLC92. We cannot share such line of argument. The need of willful negligence (demanding an increased degree of predictability) is unanimous on specialized jurists to lose the right to limit liability.

For a greater concern, the P&I Club is also found liable in excess of the limit of liability arising out of the CLC92. Without much reasoning the Supreme Court forgets about the clear wording of the CLC92 and orders the P&I to settle one thousand million USA dollars, corresponding to the maximum limit of insurance under the vessel’s entry. The Supreme Court even tries to hold the P&I Club responsible for this increased liability for not having appeared in the proceedings, as if this was a valid reason for not applying the Convention in its own terms.

The possibility to enforce the judgment and get full settlement from the Captain, Owner and P&I is very limited. On the opposite, the legal uncertainty and distrust on the Spanish judicial system will surely have wide reference.